An Overview of the 2021 Vulnerability Researchers Hack

If you thought 2020 was a big year for social engineering schemes— watch out! Twenty twenty one is coming in hot.

Let’s review this early 2021 social engineering attack and discover how even the cybersecurity pros themselves contracted malware.

This Google team’s job is to track and stop advanced persistent threat (APT) groups. Like the industry leaders they are, when TAG caught wind of a major cyber threat, they were quick to announce it on their blog.

After a few initial touchpoints where the bad actors established some camaraderie, the hackers sent a phishing email asking if the researchers were interested in collaborating. These fake researchers then sent a link to a Visual Studio Project, which when opened, installed malware on the victims’ systems.

But this wasn’t Lazarus Group’s only attack path. In some cases, real researchers clicked on their fake Twitter, LinkedIn, etc. social media posts. These posts contained links to the bad actor’s blogs— and simply by visiting this infected page, the security researchers contracted malware (in a suspected drive-by download).

How the Hackers Got In

The elite social engineers behind this North Korean cyber attack were thorough. They went through extensive effort to build fake “research blogs” and create multiple dummy social media accounts where they frequently posted— all with the intent of fooling researchers into believing they were credible fellow researchers themselves.

They “used these Twitter profiles for posting links to their blog, posting videos of their claimed exploits and for amplifying and retweeting posts from other accounts that they control,” Google explained. Their blogs even included “guest posts” from security experiments to further support their false notoriety. A true example of social engineering at its best.

Some of the hackers went as far as to share a fake YouTube video (one they themselves uploaded), claiming they found a way around a recently patched Windows Defender vulnerability: CVE-2021-1647. This was likely posted to establish themselves as researchers at the forefront of a new vulnerability, when in fact, none of it was real.

With all these clever efforts to gain the trust of their targets, some of the vulnerability researchers clicked infected links and downloaded the Visual Studio Project from emails or via social media.

“Within the Visual Studio Project would be source code for exploiting the vulnerability,” Google explained. This vulnerability is suspected to be “zero-day” vulnerability in Windows 10 or Chrome browsers— meaning, it was a vulnerability discovered by bad actors exclusively, still not widely known outside of the hacking community. In fact, Google is still trying to find this security vulnerability and is offering reward payout for help identifying it.

Regardless of what this zero-day vulnerability is, the gap in security allowed the bad actors to inject malware around fully patched, up-to-date digital defenses. A truly scary thought.

Google shared that the Visual Studio Build also contained an additional DLL which gave the bad actors their backdoor. A DLL, or Dynamic Link Library, is a custom malware that alerts a remote command and control server when a hacker is “in,” allowing them to infiltrate the system from the comfort of their own computer.

The Evolution of Social Engineering

Social engineering is evolving, becoming more and more complex with each passing year.

“This campaign was interesting because it preyed upon the desire of researchers to collaborate, including with people we do not know, to advance our work," Katie Nickels, director of intelligence for Red Canary and a target of the North Korean social engineering campaign, told TechRepublic. It played on basic human trust in their “community” and manipulated researcher’s greater sense of purpose in furthering developments in vulnerability studies.

Of course, the big “wow” of this attack was the intricacies the engineers went through to create believable social profiles and fake researcher websites and blogs.

It’s proof that even fully patched and up-to-date systems can be exploited by savvy hackers, who go to great lengths to reel in “big phish” with government connections. Such lengths, in fact, that they were willing to risk exposure of a little known zero-day vulnerability to compromise their targets.

There are some valuable lessons to be learned from this social engineering attack:

While the bad actors had social media profiles and were frequently posting, most of them did not contain profile pictures of the individuals themselves. In this picture below from Google of (now banned) users from the exploit, you can see there’s no face behind the profile. This is an immediate sign of suspicion. Educate your team to beware the faceless user! 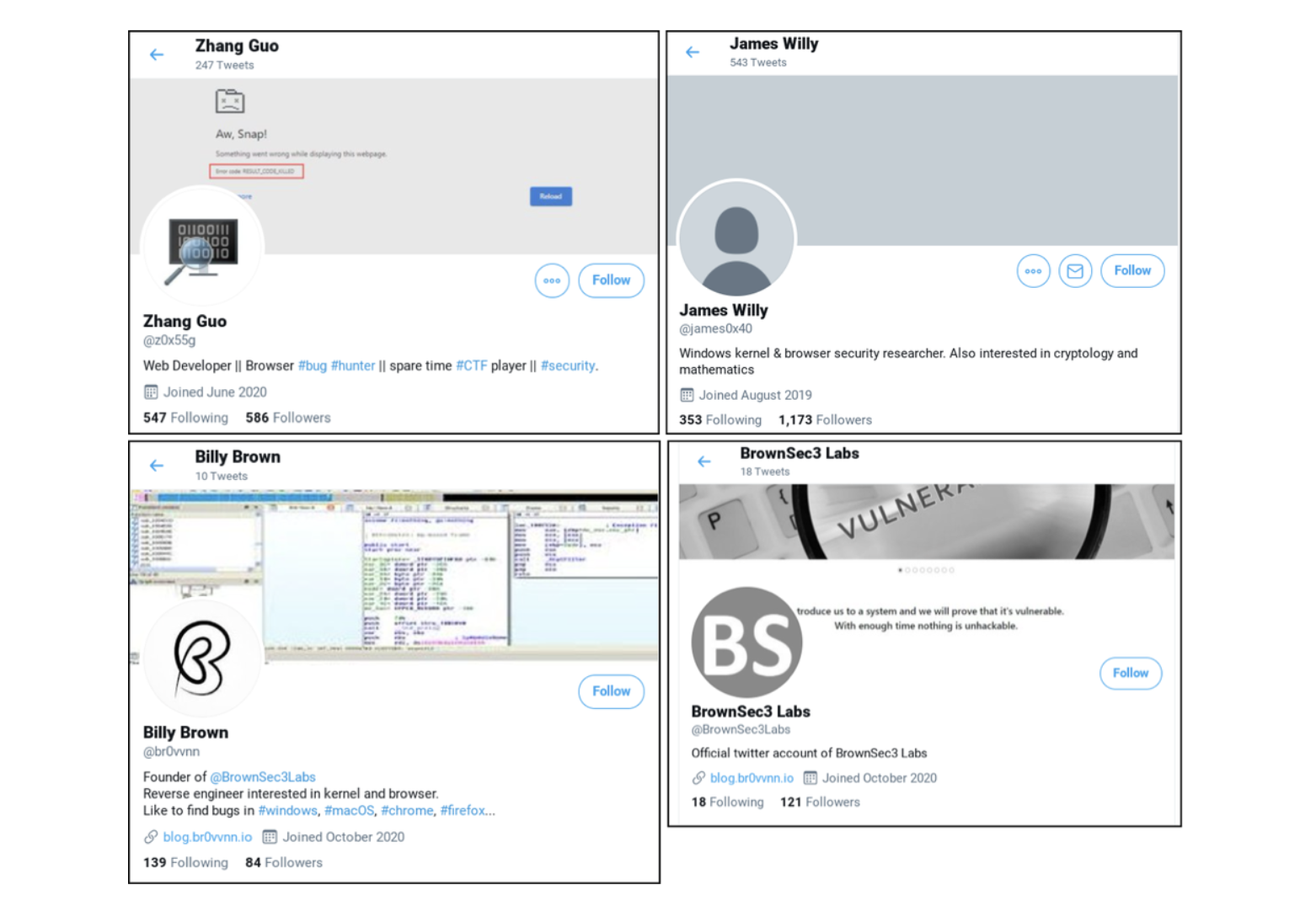 We get LinkedIn and Facebook requests all the time from people we’ve never met. But these strangers could be bad actors in disguise. Think before allowing access to valuable private data in your feeds and profiles.

A Few Steps Towards Better Security

Hackers are getting craftier. That means you need to as well.

Improving your company’s cybersecurity starts with awareness of the threat landscape before you.

Download our 5-½ Step Guide to Avoiding Cyber Threats for some impactful ways to elevate your security posture, including some resources for staying up-to-date with the latest security updates and news.

Many organizations have cyber security measures in place to prevent threat actors from breaching defenses and launching their attacks. However, there ..

You may have heard about penetration testing, and have decided to dig a bit deeper to see if this cybersecurity testing can help your organization aga..

According to a recent poll conducted by PwC, executives believe that mandated disclosures, tests of resilience, and pressure to get data security and ..